Sweden has lots of beautiful events throughout the year, and the Swedish Society tries to celebrate as many as we can. COVID has put a damper on our community gatherings, but you can see below some of the events we have done in the past. 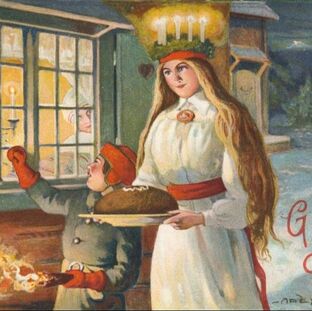 ​The Sankta Lucia tradition is one of Sweden's most famous. As legend has it, Sweden was undergoing famine and by miracle a ship laden with food showed up in the harbor. At the bow of the boat was a woman dressed in white, with a saintly halo of light crowning her hair. It was the Catholic Saint Lucy, coming to rescue them. Since then, Sankta Luciasdag has been celebrated on December 13, St. Lucy's feast day. Early in the morning on December 13, the eldest daughter of the house is dressed in a white gown with a red sash (the symbol of the saint's martyrdom) and her saintly glow is recreated with a crown of candles. The girl carries lussekatter (Saint Lucy's cats), a type of swirled saffron bun, with coffee.

Today, Swedish communities recreate this as an evening procession. Here in the Fargo-Moorhead area, the Swedish Society has been hosting Sankta Lucia's Dag celebrations each year for decades. A college-age girl is selected to play Sankta Lucia, and young girls and boys dress as her attendants and process through an area church. The legend of Sankta Lucia is told, and her special song is sung, and then the Society celebrates with homemade Swedish treats and coffee. 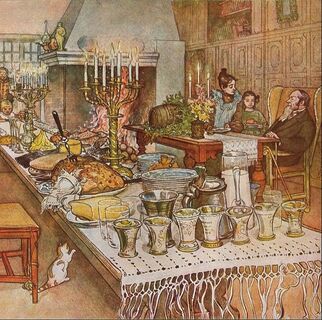 January 13 is Saint Knut's Day and closes out the Christmas season in Sweden and Finland. Known as the "twentieth day of Knut," it falls approximately 20 days after Christmas. The apocryphal story is that Saint Knut's Day was originally closer to Epiphany/Twelfth Night, but was moved to put an official end to the Christmas feasting, which had continued much longer than some people thought it should.

St. Knut's Party, as it is sometimes known in Sweden, is a time to eat up the last of the Christmas goodies, strip the tree of its ornaments and candy, dance around the Christmas tree one last time, and then throw it out into the snow. In many communities, the natural trees are saved for the Valborg bonfires.

Although less popular today in modern Sweden, the Swedish Society here in Fargo-Moorhead continues the tradition with a potluck of goodies, Swedish Christmas crafts, singing and dancing around the tree, and (symbolically) carrying it out the door and into the snow. 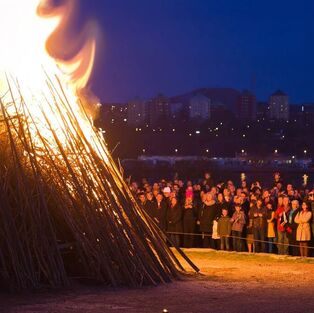 Valborg, known in other countries as Walpurgis, is celebrated in Sweden to mark the end of the old calendar year, which in the Middle Ages ended on April 30. Throughout history Swedes have used this festival, named for the Saint Walburga, to celebrate the start of spring. Normally a public, rather than family event, Swedes celebrate Valborg by singing traditional songs, eating traditional springtime foods, and having a big bonfire.

The Swedish Society does the same thing! When we are able, we gather together for Swedish treats, singing, and a (much smaller than pictured) bonfire. 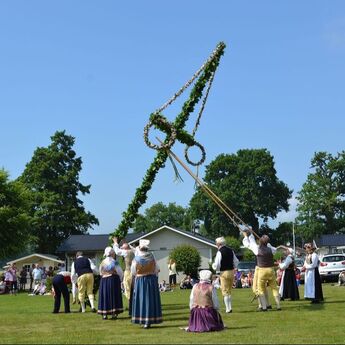 In Sweden, in part because of its northern location, Midsummer is when the majstång or May pole is erected and danced around. Midsommar is a time of greenery, flowers and flower crowns, dancing around the may pole, singing traditional songs, wearing Swedish national costumes, and celebrating the beautiful summer weather. Midsummer eve sometimes includes bonfires and legends say that any girl who picks seven wildflowers on midsummer and places them under her pillow will dream of the person she will marry.

The Swedish Society celebrates Midsommar with a maypole, dancing and singing, and a summer outdoor potluck. Flower crowns and traditional costumes are encouraged, but not required. Midsommar festivities also often include live music from local or visiting Swedish musicians. 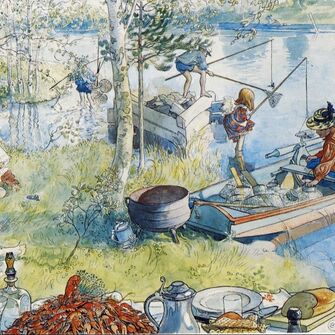 August in Sweden is vacation time, when Swedes go to the seaside or local lakes. Crayfish is a popular summertime treat. Boiled crayfish with dill, picnic foods like mushroom pies, cheese, and bread, and copious amounts of beer and icy cold akavit (strong liquor flavored with herbs and spices) are consumed. Paper lanterns decorate the outdoors and paper hats and bibs (to prevent the mess of eating crayfish from ending up on your shirt) set a festive mood. Singing Swedish drinking songs is a popular pastime.

This is one of the newest Swedish Society events and helps close out the summer season.
SOUND FUN? JOIN US!